The sun is energy. It is the day, our heat source and it is what all life on this planet needs to survive. We use the sun to not only organize our day, but to organize our year. The solar calendar is based upon the sun and is the centre of our universe. A solar narrative a second nature dialogue, the things that are scholastic, learned, and trained, such as reading and math. First nature is very primal; second nature is skill building, technique, handling situations and mediating your feelings. This develops our capacity to use our right eye-left brain circuitry, connecting us into language, calculations and logic. The right eye is our solar eye. 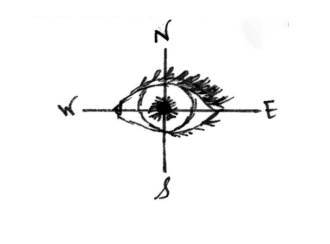 This salutation uses the energy of the sun, heating yourself up by making effort. In the archetype of numbers it is the number five, the centre of the chest, the ability to do. It is designed based on ten counts: after five poses everything flips and mirrors the salutation back to the beginning posture. There is a lot of geometry and magic woven throughout.

Number transcends language. Each number has a soul, a character, and the postures aim to emulate the soul of numbers. In the salutations every odd number is an inhale and a backbend; therefore, every even number will be an exhale and a forward fold. Pattern is predictable, just like the day. 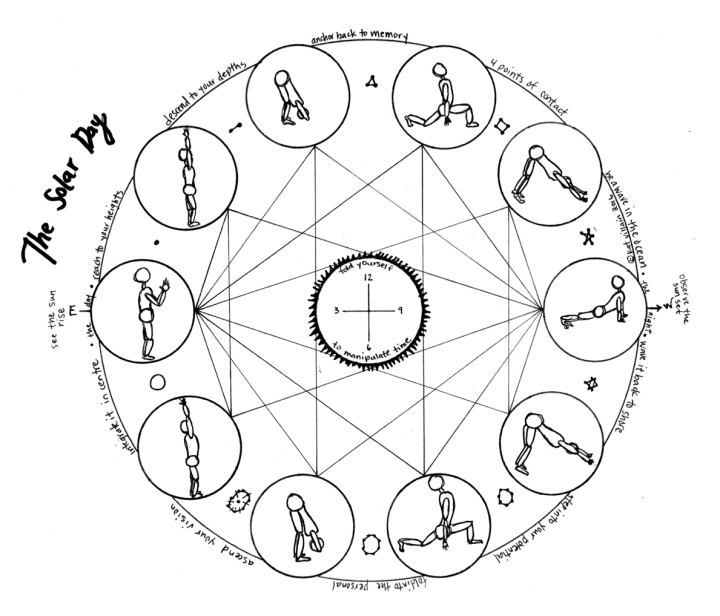 The soul of one is a point, zero dimensions, it is when you rise up out of yourself, extend your arms overhead and see the rising sun.

The character of two initiates two points of contact. Between two points is a line of communication, the first dimension. However, the shortest distance between two points is not a line, it is a fold, begin to fold yourself to manipulate time. When you exhale you will fold yourself forward from the hip joint. Play for precision in the folds; do not round your back. Leverage the sacrum instead and use this largest hinge in the body. Every fold is refined with a backbend, so look out slightly, this lets you see it coming. You never want the back getting too strong as this diminishes the potential and creates a heavier burden.

Three points of contact is our first surface, the second dimension, a triangle. The second dimension defines area, contains boundaries, yet has no depth. The triangle is the strongest polygon, inherent within is the character of strength, structure and stability. The trinity is alchemy, esoteric math: one plus one does not equal two; it always equals something new. You are the product of male and female, mother, father, you – something wholly unique. Use three to step back into a lunge, with the knee down to anchor yourself into memory. Even though you anchor, move your front body forward and up, backbend, so you are always coming out.

Four points of contact become your first frame, the third dimension, the physical and material reality. Anytime you find yourself on four points it is safe, the lower body is free and the spine is spacious rather than diminished by gravity. Dog pose is the fourth posture and is a bend in the knees with the heels lifted. Refine the fold in the hips; keep bringing the front body forward towards the thighs. There should be no angle between the wrists and hips because you are playing for the archetype of a triangle on top of your rectangular base of support.

Five is a pentagon, the human body: a head, two arms, and two legs. It is also the central point of the frame, the mind confined within. Five is upward facing dog with both balls of the big toe pressing so your pelvis stays lifted. Move from downward dog to upward dog with straight arms. This salutation is designed to ignite the heat of the sun but also to flow like water. Fire needs water to keep it in check; this is the first alchemy, fire and water. Fight for straight arms so you aren’t pumping muscle and testosterone; you are working for fluidity within the postures.

With six, now everything flips. The art is to see the north pole in the southern hemisphere. Six is sex, it is the male and female triangles superimposed. Six is a movement back into downward dog from upward dog that waves you back towards shore. You find four points of contact again, this references your physical safety.

Seven is the virgin birth, the product of the male and female triangle. It is the number of the moon, the night after the day. Seven is putting your foot forward into the future; the mirror of anchoring it back into memory. When we play polarity, every in has an out, the anchor back has a movement forward. You are in the middle mediating polarity, you are the third principle, the magician.

Eight is the confines of the boundaries, an octagon, and the closest approximation to a sphere. You are in the centre of your sphere and the linear mind first draws the octagon to approximate the sphere. Everything in nature is circulatory, eventually to be fluid is to circle the square, to know you are the diamond body within the confines of form. As you step forward, fold forward and let it be a fold into your integrity, your personal depths, and your heroic journey.

Nine is the centre of the octagon, the ability to put yourself in the centre of consciousness. Nine lifts you to your heights, ascending above your frame of reference. It is the virtue of achievement. Reach your arms overhead as you stand and see the sun setting on your personal narrative.

Ten is one in a higher dimension. It is the ability to see that the whole contains all the parts, but the whole is far greater than the sum of its parts. There is contact, communication, and a dialogue so subtle one must learn to speak the language. Take your hands and anchor them into the centre of your chest.

One round is completed, which is only half of the whole. Two rounds sets the symmetry in the two legs. You can do as many as you like to heat yourself up. Eventually you will work it cross legged because this will allow your sacrum to remain stable when you perform many of these salutations. This enables you to last a lot longer, thereby building stamina. Cross referencing the legs makes your sacrum stable when you ensure the back knee fits to the back of the front knee. You want to scissor from the knees up to the pubis then down all the way beneath yourself. Your pelvis is your depths, your primitive self wherein your physical safety lies. The magic of crossed legs is that you do not have to remember which foot to put in front because it weaves itself.